All About Hill End

There are many variations of Hill End’s history available. To discover the truth we undertook extensive research approximately 20 years ago while we were setting up our tour business, which was originally, named “The Hillend Gold Shoppe”.

To address conflicting information we used our own experience with the bush, gold digging and Hill End to understand and interpret the information available, this culminated in the writing of four books and two documentaries on the subject of gold.

Our first step was to determine the land area that was Hill End. We did this by plotting the quartz vein structure that made the goldfield. You guessed it; Hill End was the largest settlement and was located in the middle of this 20-kilometre long tract of gold producing land.

We deduced that the other settlements were not separate fields but existed like suburbs from the main site, this was further emphasised as all the main services were solely located in the “capital” – Hill End. A modern comparison of this is the classification of Sydney as not only the residents that live in the 2000 postcode, inside the boundaries of tall buildings, but as all that feed off its central network of services and live around the nucleus.

Stockman explorers grazing cattle were the first to open the area to European settlement. The first site had an Aboriginal name, Tambaroora. A boiling down works for cattle existed here, about 4 kilometres to the north of Hill End prior to goldrushes.

Australia’s goldrushes started April, 1851. (Earlier gold discoveries did occur and some were documented.) The idea of finding the Gold was provided by E. Hargraves (nothing can happen without an idea). He then initiated the idea with James and William Tom and John Lister. Within a few weeks of their discovery of the original field “Ophir” many other gold towns were established. Tambaroora was one.

On the site of Hill End (initially a suburb of Tambaroora) sprung to life as Bald Hills with its own post office and postal stamp, identifying it clearly as a separate site. As the goldrush grew so did Bald Hills, which changed its name to Forbes. Until the 1860s when another Forbes became famous for gold. One of them had to go!

Consideration was given to the Governors name McLean. A town petition was presented with the new name Hillend. It was upheld. Later the town name was Hill-End and finally settled to Hill End. Competition between Hill End and Tambaroora was painful even though they shared for many years a combined name. E.g. The Hill End and Tambaroora Racecourse.

On the other hand ditties reflected common rivalry.

In the year 1872, Hill End took over, big time, and Tambaroora faded into the past. The total area population for the Hill End goldfield, and those diggers who used its services, at its height is estimated at 30,000. In the south there was Chambers Creek, The Root Hog (on the Macquarie River) and The Lower Turon. In the North there was Tambaroora, Dirt Holes, Pep-a-day and Green Valley. These were all towns that fed off Hill End on the one goldfield.

We know there were 51 registered hotels in any one year in the area as records from the state archives confirm this. Twenty eight hotels were in Hill End with Clarke Street containing 17; some were double storey, and therefore were very substantial buildings.

Many others were only in existence for a short period eg. “The Hand and Heart Inn” on the Dirt Hole Road, Tambaroora. The innkeeper John Mahony McGrath announced his opening on the 30th July 1853.

A large population needed services, some included eight churches, five schools, four brickworks, three newspapers and a one and a half-kilometre long unbroken line of commercial buildings. At any one time 51 registered/licensed hotels were in operation in the year 1873.

What created the boom?

In the Year 1872 Hill End Gold production peaked. A number of world records captured the imagination of would be lucky strike gold diggers. At 2 am. on the 19th October, 1872 the world’s largest single mass of gold was unearthed at Hawkins Hill, Hill End.

The Beyer’s and Holtermann Specimen with its estimated 3000 ounces of gold immortalized the site of Hill End in history. This caused the final population influx. A town of hopefuls, but by late 1873 hope was looking sick so many people rushed away.

Hill End continually shrank; it had seen its glory, some of which was reported in newspapers. A look at The Town and Country Journal. 5th October, 1872 is as follows:

Saturday.
The heaviest fall of snow ever seen in the district occurred on Friday morning. On the towns outskirts the snow was half way up the fences.

Paxton has crushed about 100 tons, which, it stated, went 4 ozs. to the ton.
The Rampant Lion Gold Mining Company have crushed 128 tons of average stone, which yielded 308 ounces of gold.
Carroll and Beard’s are getting up stone for a big crushing.

Carroll’s crushing went over 1000 ozs. from 15 tons of stone.
A man killed while tamping on the Turon yesterday.
Another man also, named Griffiths, was killed by falling down the Newcastle Company’s shaft.

Fame and fortune, accidents and death, a long way from home braving the elements, such were the trials and tribulations of the gold digger.

Lone winds whisper in the gullies,
Gone are church and pub and store,
Now silence reigns where once,
Ten thousand diggers toiled in days of yore.

We used the following sources for our research:

This extensive research using a wide range of resources has given us the confidence that our discoveries are as close to the real story as possible. 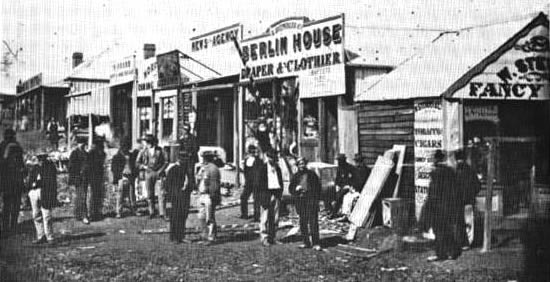