History Hill was originally established as an educational facility in 1980 by Malcolm Drinkwater in Hill End operating under the name “The Hillend Gold Shoppe”, after Malcolm’s first major history book “Hill End Gold”. The shop had the original spelling of the town, while the book carried the more popular later day wording. The book and the shop finally morphed into “History Hill” now located just outside Hill End on what was named the Bathurst Road and now named the Hill End Road. Progress, you can’t stop it!

I have a wife, our son and a few others who, when the time came all helped in the project from tour guiding to construction. Nothing beats many hands for both productivity and a much needed moral boost. For all that contributed at the right time I thank you.

At this time, February 2012 I feel confident the project is now finished. It has taken for conception to reality 32 years. In the future only minor twigging will be necessary.

The material in their museum and literature they have authored is a result of extensive research, Though there are some differences of opinions in some details the information they have collected is considered to be as accurate as possible. Malcolm Drinkwater quotes “After all we are humans studying humans, if we search our soul knowing the facts (tools and conditions of the time) and say to ourselves “what would I do if I was there”, then the truth usually isn’t far away.”

Malcolm has worked hard in all respects to illuminate the real goldrush story and this is of great importance to our history like a myth will become the figment of someone’s imagination and therefore “just another fairy tale”.

History Hill portrays the reality of a goldrush with tools and conditions as real as you can get from the 1800s. It is one thing to look at pictures, the real dimension evolves with impact when you get close to the real thing.

We leave you with the questions, have you ever seen an up close photo or video of an elephant? Or have you ever got up close to the real thing? Which do you remember best? Does the photo have texture, smell, attitude, three dimensions, cause an adrenaline rush from being so close? With that in mind…

NOW EXPERIENCE THE ADRENALINE OF REALITY AT HISTORY HILL! 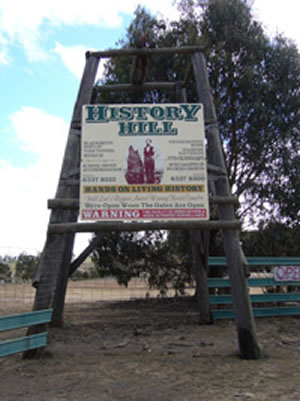