The Biggest and the Best

Using correct terminology and understanding larger pieces of gold may have been unearthed thousands of years ago but not recorded, the following is what we do know.

Records for the “Welcome Nugget” seem by all sources to be clear cut agreeing on all particulars.

Detailed sketches of the claim and underground location of the find with many photographs existing, for at the time it was by far the world’s largest piece of gold unearthed.

The “Welcome Nugget” was found on 9th June, 1858 at Bakery Hill, Ballarat, Victoria.

A party of 24 worked the claim and therefore all claimed part of the fame involved in unearthing a nugget weighing 2,217 ounces and 16 dwts.of gold. After refining it yielded 2,195 ozs. of fine gold. Comparatively its fame was short lived.

The world’s largest recorded nugget is “The Welcome Stranger”. The find occurred at Black Lead (or Black Reef), Bull-dog Gully, Moliagul and was broken up on an anvil at nearby Dunolly in Victoria, Australia, to be weighed in that towns bank. The finders were John Deason and Richard Oats, the find occurred on 5th February, 1869.

Different variations of the find location and ounce quantity exist. For many years the most popular ounce rating was 2,284 ounces (71.01 kilos).

However the publication “Gold Nuggets of Victoria” from the Department of mines, Melbourne, Victoria lists the price of gold at the time as four pounds, one shilling and sixpence, noting that the cheque for the nugget amounted to nine thousand, five hundred and eighty three pounds, which equals 2,380 ounces.

A reason for the discrepancy may come from the admittance by Deason and Oats that pieces were broken off the main piece. It is possible that the main entire nugget weighed 2,284 ounces and additions from the original find but not still attached accounted for the total presented to the bank. At least that’s our theory. If anyone can add light to this please contact the author.

The main point is that (without splitting hairs) Deason and Oats in 1869, in Victoria found about two and a quarter thousand ounces of gold in one piece which became known as “THE WELCOME STRANGER NUGGET” and this is, as far as we know, the world’s largest nugget. 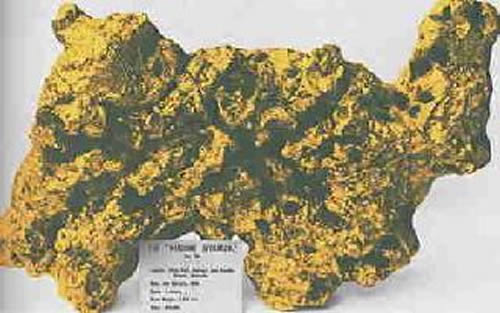 The “Beyers and Holtermann Specimen”

On 26th October, 1872 The Town and Country Journal reported in its telegram section under the heading Hill End, Saturday, “Holtermann’s landed a specimen last night weighing between 6 and 7 cwt., supposed to contain 2 cwt. of gold. More in the bottom. Great excitement.”

It was photographed, measured and displayed. It is believed to have contained 3,000 ozs. of gold. This is the largest single mass of gold ever known to be recorded and it wasn’t a one off. The quote, “monster specimen” was crushed with 272 tons of other ore from the mine at the Pullen and Rawsthorne Stamper Battery yielding 15,488 ozs, and 11 dwts, of gold. A few months later a larger one was found and recorded in the day book from the mine.

The record stated estimated gold content 5,000 ozs. with a total weight estimated at 7 cwt., the miners broke it up underground not wanting the arduous task of man handling another large piece to the surface just to see it eventually broken up and smelted. Holtermann resigned. History Hill purchased from Holtermann’s great grandson, Harry Holtermann much of the said Holtermann’s personal artifacts. Day books from the mine, collectibles and most important a treasured souvenir. Holtermann chipped the tip off the World’s Largest piece of gold. All that remains is now in The Holtermann Room, History Hill, with much more. 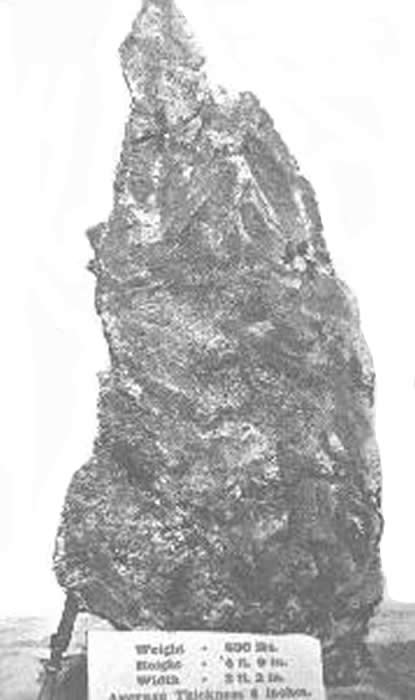